Welcome to Elm Class pages where we hope you will find out all about our Year 6 children and what they have been learning.

Elm Class has 30 children and the class is taught by Mrs Curtin, Mrs Alexandrou and Mrs Ransley, and like the other classes they also get up to all kinds of fun learning!

We have had such an exciting and busy term.

In term three, our Vehicle was called ‘What The Dickens!’ and was based on the book Street Child. We found out about the Workhouses which resulted in a debate to create a balanced argument. We used the Vehicle to also learn about William Morris. By studying his wallpaper, we made sketches to start designing our own wall paper. We then looked at existing wallpaper and surveyed which colours, patterns and shapes were the most popular before deciding on our own printing block. Using a polystyrene block, we carved into it, practiced several colours before making our own wall paper. We finally evaluated our work.

In computing, we learned how to use coding in MSWLogo and Python to create shapes and repeated patterns. This complemented our printing.

Our Science topic was all about the circulatory system – describing the functions of the heart, blood vessels and blood.

We ended our Term by having a Victorian Day. Everyone dressed up, the day followed the structure of a typical Victorian school day with writing of times tables, alphabet and poems on blackboards with chalk. Silence was expected and the Dunce hat was used for those speaking out of turn! The head teacher even came in to demand who had stolen some cheese from the kitchen. Poor Alex was the culprit and, in good spirits, was given a lashing (sound effects only!). Lunchtime consisted of gruel and dry bread and the afternoon included chores out in the playground. Our Vehicle in term four was Be Strong; Live Long!  The whole term was all about keeping ourselves physically and mentally strong.  We used Percy Jackson and the Lightning Thief to base all our English writing which was reinforced with the Ancient Greeks.  Our Science topic, Animals including Humans, continued with finding out about the effects of drugs, exercise and nutrition on the body.  Our RSE topic was Healthy Me! and making the right choices. We found out about the Spartans and Athenians.  In computing, we learned how to create QR codes and then made our own to make a storyboard on the Battle of Marathon – the first marathon run by, Phidipides.

We found out about Phidias, one of the greatest sculptures of Ancient Greek times, and so we used clay to create Greek pots and then painted them.  We also made plaster of Paris plaques which we carved Greek designs into.  Daniel decided to carve and paint Spartan helmets and shields.

We finished our Vehicle by having a cooking day.  We marinated chicken before cooking the Souvlaki on a hot plate.  While the marinade was working its magic, we sliced, diced and chopped fresh goods to make Tzatziki and Greek Salad.  In the afternoon, we ate our creations with pitta bread and Dolmades washed down with honey infused orange juice and some dried figs. A huge thank you to Mrs Alexandrou’s daughter, Lydia, for helping and choosing the traditional Greek music to listen to whilst eating. What a busy and brilliant start to our year 6!

So much learning and activity has taken place already!

In term one, our Vehicle was all about ‘The Wonders of Nature’.  We started by using sweets to introduce classification keys and learned about some important figures that have contributed to the Natural World of Science, such as Charles Darwin, Mary Anning and Carl Linnaeus.

We were fortunate enough to be able to walk to Port Lympne Wild Animal Park for a tour and workshop by Richard Barnes (Evelyn’s Dad!).  He talked to us about how many of the animals had adapted to their natural habitat and talked about specific features. The tigers and wolves were a firm favourite!

In Science, to understand the work of Charles Darwin and his theory on ‘Survival of the fittest’, we pretended to be birds with different shaped beaks.  Using different tweezers, we tested which were the best shape to pick up seeds.  We found out that the birds with pointed beaks were much more likely to survive if their diet consisted of sunflower and pumpkin seeds.

Towards the end of term one, we researched climates and biomes around the world and then created our own out of boxes.  Can you recognise which biomes we chose to make? 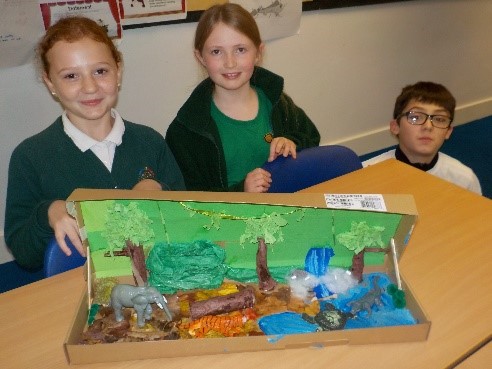 Finally, Sam from STEM came to extend our understanding of bridges from year 5 to explain about structures in different buildings.  We then made our own Geodesic domes like the Eden Project building.  Working in small teams, we started by creating small domes with straws and butterfly clips.  These made triangles to form pentagons and hexagons. 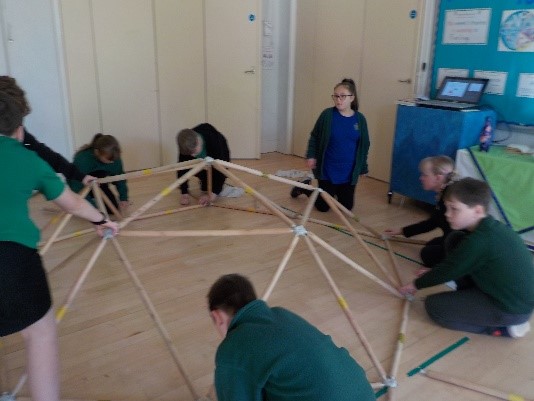 Then, in four large groups, we used wooden poles and special joins to make the same dome but on a larger scale.  An amazing time was had by all.

We’ve also raised money and awareness for MIND, when we celebrated a Mellow Yellow day, and wore odd socks during Anti-bullying week.  This coincided with Children in Need Day.  Can you spot any spotty socks?  (Pun intended!!) 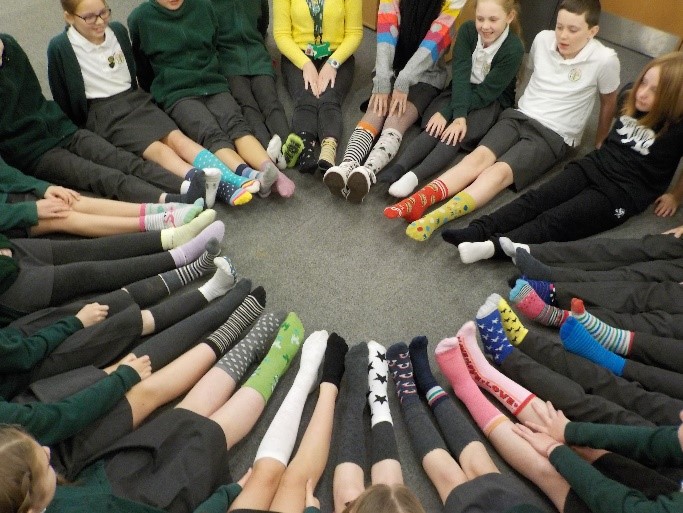 In term two, we were lucky enough to have David teach us tennis.

Term two was also our Vehicle ‘Lest We Forget’.  Sam from Living History came to join us and gave us a quiz, showed us his re-enactments of World War II and brought with him some artefacts to share.  This was a great way to start our work. 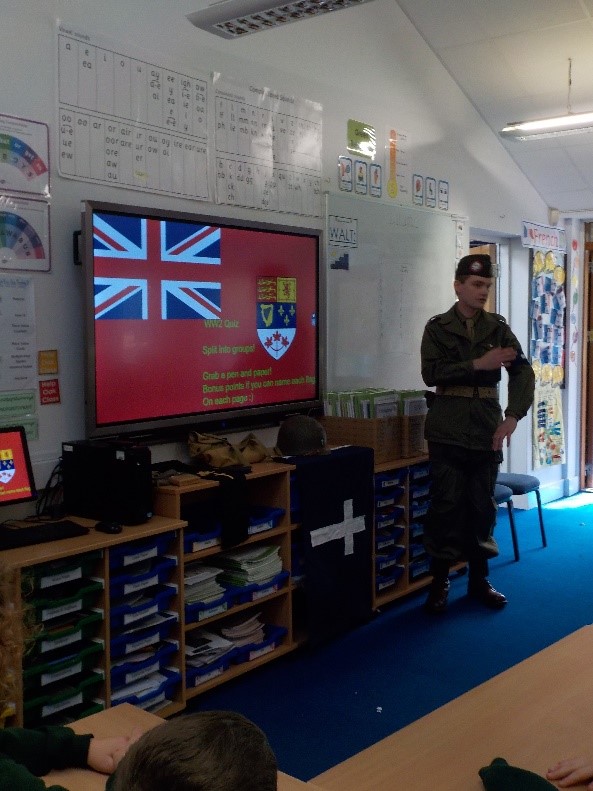 We went to the Church on 11th November to read out the Beatitudes and to remember those who fought for us – We will remember them.  This was linked with our RE topic - What would Jesus do?- as the Beatitudes were spoken by Jesus at the Service on the Mount when he taught his disciples lessons for living.

One afternoon, we went on a field trip around Lympne to map where evidence of World War II could be found.  We visited Airmen’s corner in St Stephen’s Churchyard, found a plaque for the airfield on the side of the County Members and then crossed the road to look at the airfield, once vital to the War effort.  We then walked along Aldington Road and Otterpool Lane to view the aircraft hangers that are now derelict.

We finished our Vehicle by creating homemade soap as Christmas presents and Christmas candle holders from jam jars and Epsom salts as they did during the war.  As resources were scarce, these are two things they were able to make for their homes.

To support the Reception children, this term we were lucky enough to go with them to the local shop where they could buy themselves a treat.  Next term, we hope to join them on another outing. 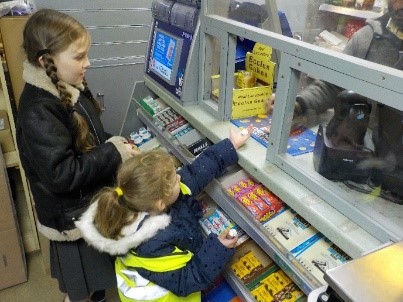 So much achieved in such a short space of time!

I wonder what term three and four will bring?